Ludwig von Mises (1881-1973) was the greatest economist of my time. His greatest works can be accessed here at no charge.

Mises believed that property, freedom and peace are and should be the hallmarks of a satisfying and prosperous society. I agree. Mises proved beyond a shadow of a doubt that the prospect for general and individual prosperity is maximized, indeed, is only possible, if the principle of private property reigns supreme. What's yours is yours. What's mine is mine. When the line between yours and mine is smudged, the door to conflict opens. Without freedom (individual liberty of action) the principle of private property is neutered and the free market, which is the child of property and freedom and the mother of prosperity and satisfaction, cannot exist. Peace is the goal of a prosperous and satisfying society of free individuals, not peace which is purchased by submission to the enemies of property and freedom, but peace which results from the unyielding defense of these principles against all who challenge them.

In this blog I measure American society against the metrics of property, freedom and peace.

"Strange Fruit" or "The Lynching of Venezuela by Rollo Tamasi"

Chavismo, the leftist ideology of the late Hugo Chavez, is bearing "strange fruit" in Venezuela's streets.

Venezuelan students are being "disappeared," or clubbed and shot to death by Rollo Tamasi, and still there is not a single toilet paper square to spare in the hands of the "workers." 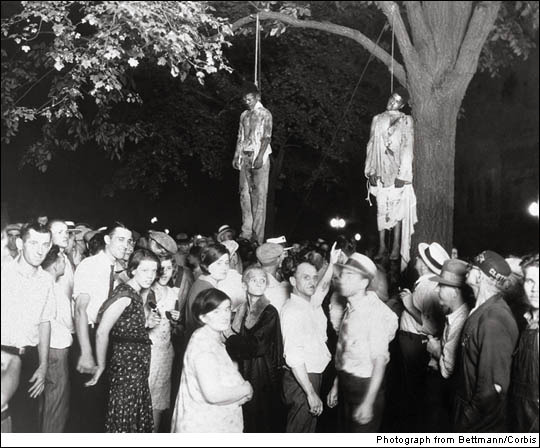 Who is Rollo Tamasi? He's the Klansman under the white hood who hangs "niggers" and gets away "clean."


He's the policeman in military armor who swings a nightstick and fires an AK-47 at unarmed, fleeing civilians. He's the pretty, empty-headed woman -- Andreína Tarazón -- who is the National Superintendent for the Defense of Socio-Economic Rights.

He is Venezuela’s Dictator-President Nicolas Maduro who rules by decree.


While you loiter in a federal food line, awaiting your turn and your portion of government rations, while you shit in a hole and wipe your ass with pages of the family Bible, Rollo Tamasi dines on caviar and wipes with tissue paper that is soft as a cloud. When the world goes to shit, thugs and thieves are always well off.

Rollo will tell you he's neither a thug nor a thief. He's a seeker of justice and fairness. Every skull Rollo cracks, every egg he "liberates" is not for his benefit, but for yours. At least that's his story and he's sticking to it.

And he gets away with it because you believe him. Why? Because you're either blinded by envy, seduced by stupidity or paralyzed by fear.

What do you think of the following? According to the Caracas Chronicles, this is what recently gushed across the tongue of Rollo Tarazón, the National Superintendent for the Defense of Socio-Economic Rights:


She claimed that the Law of Fair Prices “doesn’t seek to limit the private initiative, but aims to boost national production and secure the worker’s access to goods and services.” And about the penalties foreseen by the new piece of regulation, Tarazón said that they would be implemented progressively under the “principles of justice” and that “the Judicial System would play an important part in setting them.”

You see now why the world goes to shit? You allow vacant-headed morons to takeover. And when they do you are powerless or too scared to do anything about it. You've got your "socio-economic rights" but no food or toilet paper.

You want to know how and why things end badly, read this article: Venezuela: The Last Days of Private Enterprise, by Enrique Standish. That is not his real name by the way. Enrique is in Venezuela. He uses the pseudonym for "safety reasons." Enrique writes:


The private sector in Venezuela has barely managed to survive in Venezuela after 15 years of the “Chavista regime.” Most of Venezuela’s largest companies, as well as most banks, insurance companies, and agri-business industries were long ago nationalized or confiscated by Hugo Chávez. Now the final death sentence for the remaining businesses has come through new foreign exchange and price control regulations.

And, contrary to pretty Ms. Rollo, this is how Enrique describes the Law of Fair Prices:


According to this law, no economic activity in any field can be performed in the country without the prior permit from the Orwellian “National Superintendency for the Protection of Socioeconomic Rights.” Thus, if a lawyer wants to open his own firm or a farmer wants to sell from his truck, they will need a permit, even if they have previously registered companies to that effect.

Well? No wonder the pretty bureaucrat, Rollo Tarazón, is enamored with the law. Maybe she's not as empty-headed as portrayed.

No, in truth it is the Venezuelan "workers" who are the empty-headed numbskulls.

To me, there is only one thing worse than empty-headed Venezuelans...empty-headed Americans. Why? Because I am an American, and because Washington, DC is full of Rollo Tamasi's named Barack Obama, Kathleen Sebelius and Janet Yellen. American "workers" adore them.

Southern trees bear strange fruit,
Blood on the leaves and blood at the root,
Black bodies swinging in the southern breeze,
Strange fruit hanging from the poplar trees.

Pastoral scene of the gallant south,
The bulging eyes and the twisted mouth,
Scent of magnolias, sweet and fresh,
Then the sudden smell of burning flesh.

Here is the fruit for the crows to pluck,
For the rain to gather, for the wind to suck,
For the sun to rot, for the trees to drop,
Here is a strange and bitter crop.

* Abel Meeropol is the pseudonym of Lewis Allan, who wrote "Strange Fruit" while living in New York in 1937. Did Allan use a pseudonym for "safety reasons?" Did he fear the wrath of Rollo Tamasi?


Speaking of Tamasi, he was created in the mind of a movie character, Ed Exley, in the movie LA Confidential. IMDB quotes a conversation in the movie between Exley and fellow cop, Jack Vincennes:


Jack Vincennes: Why in the world do you wanna go digging any deeper into the Nite Owl killings... Lieutenant?
Ed Exley: ...Rollo Tamasi.
Jack Vincennes: Is there more to that, or am I supposed to guess?
Ed Exley: [aftre gathering his thoughts] Rollo was a purse snatcher. My father ran into him off duty, and he shot my father six times and got away clean. No one even knew who he was. I just made the name up to give him some personality.
Jack Vincennes: What's your point?
Ed Exley: Rollo Tamasi is the reason I became a cop. I wanted to catch the guys who thought they could get away with it. It's supposed to be about justice. Then somewhere along the way, I lost sight of that...

Actually, I think somewhere along the way "justice" lost its meaning.
Posted by Sherman Broder at 12:46 PM

Investing With The Investor Junkie